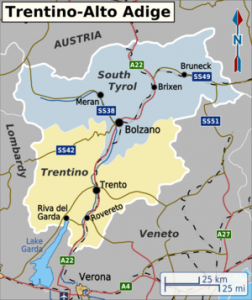 We began to explore Trentino as a means of expanding our portfolio: having tasted various wines in the Milan office we were seduced by taking a trip upnorth to see where all the exceptionally exquisite wine was coming from. As we had hoped, we were not disappointed! Trentino Alto Adige is situated in the southern slope of the Alps, directly in contact with the Po valley and Veneto. The province’s territory is almost entirely mountainous but however in no way a uniform landscape; infact it takes on a complex assortment of shapes and climactic conditions within relatively small distances. Thanks to certain factors – such as low population density, vast isolated spaces and the institution of various natural reserves – numerous species of animals and plants have been aptly preserved in this region gifted with such rare allure. During our stay in Trentino we were positively awe-inspired by the staggering beauty of the tall, imposing mountains looming over us at all times; ever pleasingly refreshed by the keen scent of cold glistening snow on their peaks.

Trentino Alto Adige is an autonomous region, with many privileges and vastly independent of the central Italian government. The main reason for such unusual autonomy lie in its borderland, bilingual nature and the ethnic tensions that perturbed its recent past. The region (also known as Trentino-South Tyrol) consists of two provinces, Trento (Trentino proper) and Bolzano/Bozen (Alto Adige). The majority languages are respectively Italian in Trentino, German in Alto Adige. Once part of the Austrian Empire, it is bordered by Austria’s Tyrol to the north, by Switzerland northwest and Lombardy and Veneto respectively west and south. The Empson wineries are concentrated in Trentino a rocky landscape covered by vast forests and traversed by the river Adige.

Viniculture in this region has very old origins. By the time Rome was conquered, for instance, the area was already blessed with excellent wines. During Imperial times techniques for winemaking were perfected, so much so that Augustus did not try to hide his preference for the “Tridentum” (Trentino) wines. Plinius, in speaking of the region’s fine wines, reminds us that it was the people of Trento to introduce the usage of wooden barrels tied with wicker to preserve wine.

The Trentino DOC was one of the first in Italy, going back to 1971. It covers Cabernet, Pinot, Moscato, Vino Santo, Riesling Italico, Riesling Renano (Rheinriesling), Traminer Aromatico (Gewürztraminer), Lagrein, Nosiola, Marzemino, Teroldego etc.: a total of 20 varieties, all grown on select, highly favorable terroirs – so much so the Trentino DOC practically includes every vineyard in Trentino. The quality standards in the region are among Italy’s highest, severely supervised by such top wine academies as the famous Istituto Agrario di San Michele all’Adige. For this reason, we selected Trentino as the premier region for our own, proprietary Bollini brand. 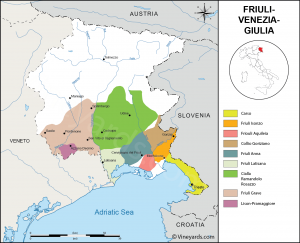 Situated in the north-east of Italy, with its wide variety of landscapes, we discovered Friuli-Venezia Giulia feels as much Slavic and Austrian as it does Italian. In fact, Friulian culture is surely more Mitteleuropean than Mediterranean – a crossroads of civilizations, alternatively conquered by this or that European power throughout history. Politically speaking, the region is called Friuli-Venezia Giulia. However, 96% of this is made up of Friuli (from the Latin Forum Iulii): Venezia Giulia is merely a sliver of land between Friuli and Slovenia, the remnant of a much larger area that was dismantled after WWII. Between mountains, hills, the rural central plains, and the coastal area, there was much sight-seeing to be done on our journey through this land struck by such tumult over the years. Within a short amount of time it was clear that we would be absorbing an assortment of cultures; in fact the area is divided not only in it’s appearance and architecture (ranging from ancient Roman ruins to eclectic Austrian castles), but even by the languages spoken within the region: we heard Slovenian in the north, German in towns adjacent to Austria, and of course, at the time, the most commonly spoken Friulan dialect.Friuli-Venezia Giulia’s cuisine, as one might well imagine, is also influenced not only by Italian traditions and standards but by the multiethnic diversity from which it originates. From the classically Friulan Prosciutto di San Daniele to gulash (a typical Hungarian dish made of beef and cooked in strong spices), Friuli beheld a number of interesting combinations to tantalize our palates, and to invariably combine with their selection of exceptional wines. In each place we visited, we were welcomed with the utmost hospitality and cordiality. Friulans, in light of their region’s past, are known to be extremely open-minded, with an unprecedented (in Italy) spirit of acceptance and integration with all tourists and foreigners in general.In the same eventful 1970s which saw a part of Friuli being damaged by a tragic and disastrous earthquake, Friulian winemaking began making waves of an entirely different order, gradually becoming the number one region for Italian whites of unparalleled structure, character and aromas.Reds are the minority, albeit also excellent, and the varietal map of both reds and whites reflects the multicultural tradition of the region, flanking international grapes like Pinot Blanc, Chardonnay, Cabernet, Merlot and native varieties like the celebrated Friulano (formerly Tocai Friulano; nothing to do with Hungarian Tokaij!), the rare, treasured Picolit and fragrant Ribolla Gialla (whites); or Franconia, Pignolo, Refosco dal Peduncolo Rosso, Schioppettino, Tazzelenghe (reds) – names that stand for unique, mellow intensity and fruity appeal.